My Brother’s Table began as a vision shared by a handful of people who were moved by compassion to respond to the growing needs of the hungry people they saw around them. In 1981, these needs were manifest in the City of Lynn—an old city certainly with its share of poor people. The founders realized that food pantries, senior services, and school-based programs did not meet the needs of everyone in the community. They sought a new way of addressing the nutritional needs of the hungry.

By the fall of 1981, the desperate need of the hungry in Lynn was increasing—alarmingly. Poverty and hunger are the same in “good” and “bad” economic times; only the numbers change, depending upon the times, and 1981 was not considered a “good” time for the economy.  There was a recession, inflation, and unemployment.  Federal funding was drying up for many social programs, and more and more people were in need of help. 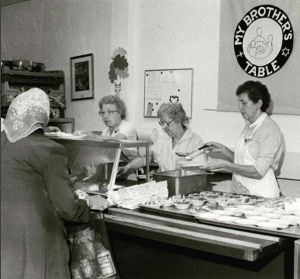 That fall Father Harry Lawson of St. Joseph’s Catholic Parish in Lynn and Nancy Ryan of Catholic Charities in Peabody met at a seminar. During a break at the seminar their conversation turned to the poor and the growing number of people who were hungry. Nancy Ryan shared a tragic sight she had witnessed from her office window. One day Nancy observed a group of men gathered around a fire in a cemetery trying to heat a can of beans they had just received from a food pantry.

This vivid picture of desperation remained with her and as she shared the details with Father Lawson she revealed to him a hope—she called it a dream—of a place where these desperately needy people could go inside, out of the weather, to sit down and eat a hot, nourishing meal.  She envisioned a place where they could feel comfortable—both physically and psychologically—and for a time, at least, regain the lost dignity that poverty and hunger steal along with material necessities.  Father Lawson suggested that she pay a visit to St. Joseph’s Parish in Lynn, where he would gather some like-minded individuals to talk about the problem—and her dream—and more importantly, the possibility of making that dream a reality.

This is where My Brother’s Table had its beginning—in the shared compassion of two people who could no longer watch what was happening to poor people but needed to reach out and do something about it. 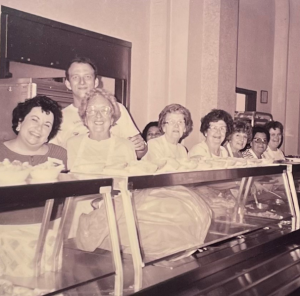 Soon after the first meeting took place Father Lawson introduced Nancy Ryan to the other individuals who would help found My Brother’s Table.  Frank Keaney, Sister Rita Hennessey, Father John Gallagher, Sister Florence Barton, and Sister Mary Kelleher shared the compassion to do something to help these people and the desire to make Nancy Ryan’s dream a reality.

After much hard work and help from many people, My Brother’s Table served its first meal in October of 1982 in the original location on Union Street. Originally open three days a week the Table served 75-100 people at a time and soon began serving seven days a week, 365 days a year. 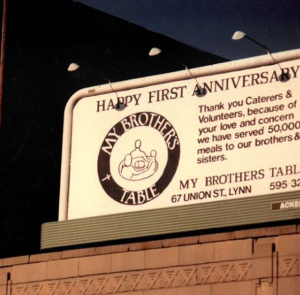 In November 1992, My Brother’s Table moved to its current location at 98 Willow Street. The dining room is spacious and attractive with high ceilings and colorful artwork decorating the walls. There is a full, commercial kitchen with space to store donated food and prepare meals for large groups.  My Brother’s Table has been open over 13,000 consecutive days. Last year alone My Brother’s Table served over 1 million free meals.
My Brother’s Table currently serves lunch and dinner Monday through Friday and one meal per day on Saturdays and Sundays. In addition to serving meals 7 days a week, MBT delivers meals to homebound individuals, participates in a family dinner program, provides meals to at risk-seniors, and hosts a free weekly medical clinic.

Over 2,500 volunteers a year donate their time to help feed every guest who comes to our door. We have shared our table with our neighbors since 1982 and will continue to do so with dignity, humor, love and kindness.